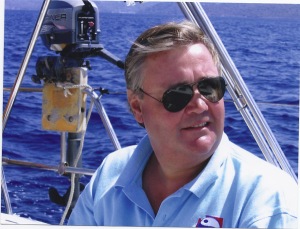 Rollo Clifford, an internet entrepreneur and expert in change, has a lifetime’s experience in guiding companies, charities and groups through challenging times. He has a proven track record of spotting world changing technologies and turning them into reality.

Join Rollo at his seminar “The Headware update” where he will show you how you can tap into your “on-board” computer, your brain.This 3 hour session is available in house.

Use your ingenuity and untapped talents to help you to succeed during the current economic crisis – now described as ‘the worst ever’.

Make your own luck – there are opportunities for all – you just need to know how to see them. Learn how to increase your knowledge and perception as you redefine your goals and aspirations.

Connect with Rollo on LinkedIn :

Rollo Clifford travelled around the world in the early 70s. He worked in various countries including Western Australia, where he spent a period working with the famous Lang Hancock, exploring for the vast iron ore deposits in the Hamersley’s. Following this he joined the London Metal Exchange and spent 10 years trading metals and other commodities.
In 1980 he joined the Mast Organisation where he ran speed reading skills, business writing, presentation techniques, running effective meetings, and time management programmes.
After three years, Rollo branched out on his own running management skills training courses for companies such as BP, Marks & Spencer, Hewlett-Packard, Otis, Mercantile Credit, McCarthy and Stone and Citibank worldwide. He specialised in applying tailor-made training seminars as he believes firmly that teams that work together, and learn together, implement the skills they acquire more effectively; thus, improving the value for companies HR spend. He designed total sales training and management courses for Otis and Mercantile Credit. Rollo developed the programme, trained the sales managers how to manage, the sales team how to sell, and the engineers customer relations skills.

From the middle 80s onwards Rollo focused almost exclusively on Team Operating plans. This involved working with Director /manager teams so they clearly identified their aims and objectives and strategies to improve their performance – and did it! See quotes from McCarthy and Stone-John McCarthy, and Ian Cormack, Citicorp.

In 1993/94 he returned to London Metal Exchange with Metalgesellschaft and developed the first global commodities index. He qualified in the SFA exams, the Financial Services Act. The MG Metals Fund was launched in 1993 at the bottom of the metals market and subsequently achieved returns of over 47%.

Having cut his teeth at The Centre for Policy Studies, Rollo went on to run Policy Search. Following the Redwood Major contest he founded, funded and ran The Conservative 2000 Foundation.
Rollo co-ran the Conservative Business Liaison Unit for William Hague and set up the first live Internet debate in the UK with William Hague.

Following the guidance of an old friend, Alfred Elbrick of Alex Brown (Elbrick was a legend in the first tech boom, Elbrick led the European roadshow for Bill Gates and Microsoft prior to its flotation. He went on to take both the first Israeli and Indian tech companies to NASDAQ). Having been an early member of the ‘solder set’ at Downside Schools electronics society Rollo built his own circuit boards with transistors, resistors, and capacitors in his 16s.

Rollo turned his experience in building companies to early-stage technology start-ups. He has always been an ‘early adopter ‘of technology from Sinclair, Amstrad and other early computers. Companies that were too small for Investment houses were introduced to Rollo and his group of investors. The first success was Optimay GMBH which invented the first portable software for the growing GSM mobile phone industry. Investment was made at a valuation of $20 million and it was sold to Lucent technologies 18 months later for $62 million. He and his group went on to back a number of the companies including Bookham Technologies – ‘the star of the first tech boom’, Intelligent Engineering, eMuse technologies, and others. He has been involved in the medical field with Lombard Medical, Smart Implant, and the alternative energy field with Highway Energy Systems.

He launched the “The Headware update “ a three hour seminar to combine the experiences, both good and bad, over 30 years and updated to fit the needs of today. It shows how what we know today about the brains software can be matched to technology. He runs a regular series of seminars in London and abroad.

Rollo is currently working in non-executive director roles in emerging technology companies, consulting on the effective management of ‘The Knowledge Revolution’ and internet trading for businesses. He continues to mentor specific projects that require a team to be focused and effective -and successful.

“If I tell you there are 2 billion stars you believe me; so why, when I put up a sign saying ‘wet paint’ don’t you?” (Sherlock Holmes, BBC)

“It’s a curious thing, for anyone with a sense of the historic, to be living midway through a genuine revolution. Few people would now dispute that our often painful transition to a digital era is likely to be as significant as the industrial revolution or the Reformation. But from our mid-point, what’s fascinating is the sense of powerlessness in the face of this rapid change. It’s as if we’re waving stop signs at a tsunami.Antonia Senior Guardian 13/5/12”

I find myself in an interesting position in ‘the Revolution’. I have spent 30 years with directors and teams helping them to clarify their thoughts, aims and goals. I have also seen life from the geek/tech end. I have invested in, managed, and exited -or closed, several tech companies and have been in the internet world for 20 years. The two sides can talk the same language but often don’t. This makes me uniquely able to offer myself as an interpreter and mentor.

I combine both to understand what a group needs and what is relevant to them. We develop a strategy with them and then make sure that ‘the internet end’ reflects their real issues so they get what they want out of this new approach, allowing them to surf the wave not get swamped by it. The language used is changing daily, you either get irritated by it and want to steer clear, or, get understood and understand what all this entails.I would like to talk to your team.

I would like to meet each of the core members of your group – separately. I will listen to what they see as their current position and what is relevant to them. I analyse this against your internet presence, or lack of it.Then we meet (1 hour) together to present my findings, hear your response and recommend a strategy. We can adjust it where necessary. If you don’t have the internet resources, we do. We would introduce you appropriate associates and manage the process for you.

I look forward to meeting you shortly.